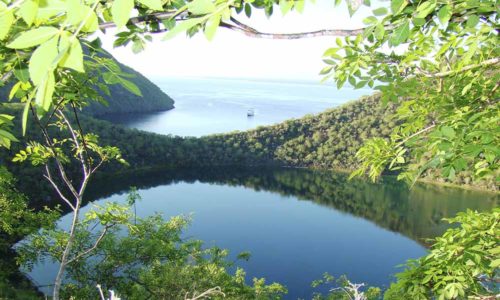 It has been identified in the archipelago 220 endemic plant species, 399 native and 119 introduced; this flora was carried by the winds, the sea or by men, migratory birds of the continent carrying in their feathers, beaks and paws seeds and spores germinating in the insular soil transforming over time, its own structure and physiology as a result of acclimatization to the new way of life. Because of these adaptations, some species in the islands are unique in the world and many are similar to the American continent.

It is believed that the flora and fauna are not native to the islands, but have been transported from the mainland. The seeds or spores that moved from one island to another gave birth to new species that repeated the process of evolution.

All these species, as well as zoos, have achieved the process of adaptation to the environment "as Darwin has shown.

In the lower islands, desert landscapes are observed due to low humidity and lack of rain. Instead, the uplands have more frequent rain showers and therefore have a greater presence of vegetation.

In low humid areas and other large growing ferns, evergreen varieties Guayabillo, pasiflora, cafetillo, mosses, mushrooms, huaicundos, grow in high humidity (between 200 and 500 meters altitude). Abundant guavas and citrus fruits and other Andean paramo species have been planted, as well as vegetables such as corn and potatoes. Soils reach only 10% of the total agricultural capacity.

In the larger Galapagos Islands, there are four ecological zones: coastal, low or dry, in transition and humid. In the first zone are species such as arrayancillo, red, jeli and white mangrove. Cactus, palo santo, carob, manzanillo, chala and muyuyo are grown in the second zone.

The tallest trees, epiphytes and perennials are in the transition zone. Among the most common varieties are the "uña de gato" (cat's claw) and the cafetillo. And in the wet there is cogojo, Guayabillo, cat's claw, cafetillo, pasiflora and some types of moss, ferns and mushrooms. The plant covers a total of 932 species, 7 and 925 non-timber woods.

The only endemic species in the region, the wildlife population includes 77 types of birds, 60 fish and 233 of the plant kingdom.