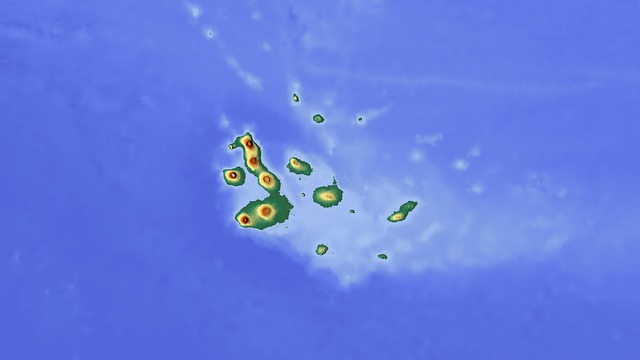 Map and a brief history of the Galapagos Islands

The Galapagos archipelago was discovered by chance in 1535, when the bishop of Panama, Tomas de Berlanga, drifted off course as he headed for Peru. The bishop reported his discovery to King Charles V of Spain and included in his report a description of the giant Galapagos (turtle) that gave its name to the islands.

It is possible that the Indian inhabitants of South America were aware of the existence of these islands before 1535, but there is no record of it. In 1953, the Norwegian traveler Thor Heyerdahl found what he thought were pre-Columbian pottery shards on the islands, but the proof does not seem certain.

The Galapagos Islands are an archipelago located 1050 kilometers from the Ecuadorian coast. The archipelago comprises 13 main islands, 6 smaller islands and 107 islets that rise from the north and south sides of the equator.

It is estimated that the first islands were formed more than five million years ago. Others are still information and the last volcanic eruption took place in 2005.

The islands emerged from the ocean depths as a result of constant eruptions, which resulted in large masses of material on the surface, creating a surprising number of islets and islets, large and small, some with volcanoes. The largest volcano of today is the Wolf volcano, which rises to 1707 meters above sea level.

Volcanic activity in the islands is relatively high, similar to that of the Hawaiian Islands, characterized by cones that extend upward in the form of shields, crowned by huge craters. The archipelago covers an area of 693,700 hectares or 1,714,000 acres, and its height varies from sea level to 1,707 meters (5,600 feet). Nearly 97.5% of the surface is protected parks, the rest being inhabited areas.

For more than three centuries after their discovery, the Galapagos served as a base for a succession of buccaneers, seal hunters, and whalers. The islands provided sheltered anchorage, firewood, water and plenty of food in the form of giant Galapagos tortoises, captured in the thousands and piled alive in boat holds. Turtles could survive a year or more and provide fresh meat to seafarers long after they leave the islands.

The first approximate maps of the Galapagos Islands were made by Buccaneers at the end of the 17th century and scientific research began at the end of the 18th century. The most famous visitor to the Galapagos was Charles Darwin, who arrived in 1835, exactly 300 years after the bishop of Panama. Darwin spent five weeks there, writing notes and collections of wild animals that were important proof of his evolutionary theory, which he was just beginning to develop.

Ecuador officially claimed the Galapagos archipelago in 1832. For about a century, the islands were inhabited by a few settlers and served as penal colonies, the last of which was closed in 1959.

Some islands were declared wildlife sanctuaries in 1934 and the archipelago officially became a national park in 1959. Galapagos tours began in the late 1960s and it is now estimated that between 50,000 and 60,000 000 people visit the islands.